This is my entry in The Great Debate Blogathon, which is being hosted by (Citizen Screenings) and myself. 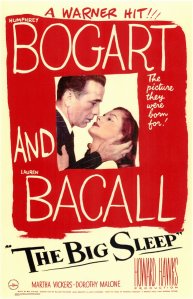 Some have said the plot to The Big Sleep (1946) is impossible to follow.

Bosley Crowther, the film critic for the New York Times for 27 years, said of the movie:

“The Big Sleep is one of those pictures in which so many cryptic things occur amid so much involved and devious plotting that the mind becomes utterly confused. And, to make it more aggravating, the brilliant detective in the case is continuously making shrewd deductions which he stubbornly keeps to himself. What with two interlocking mysteries and a great many characters involved, the complex of blackmail and murder soon becomes a web of utter bafflement. Unfortunately, the cunning script-writers have done little to clear it at the end.”

Is the story (based off a hit Raymond Chandler novel) really so hard to understand?…Yeah, kind of. I wouldn’t agree with Mr. Crowther that it is as bad to understand as he makes it out to be, but you need to pay attention. I made the mistake of multitasking near the end of the film (which I should never do anyway) and was totally lost when the credits rolled. Even keeping the film paused for too long made me confused. It required absolute concentration from the entire time. Maybe I’m not very bright but that was my experience.

If you can dedicate your full attention to it for its nearly two hour run time, you’ll have a good time. I don’t think the story of private detective Phillip Marlowe (Humphrey Bogart) trying to solve a blackmail case for a rich family is great. Sure, it’s filled with murder, twists, turns, interesting characters, a nice performance by Bogart, and good interplay between him and Lauren Bacall (who plays one of the daughters of Marlowe’s rich client), but I got more enjoyment out of movies like The Maltese Falcon (1941) and High Sierra (1941), where the acting was outstanding and the stories constantly intriguing…I’m being a little hard on this film, aren’t I? Okay, let’s get back on track. 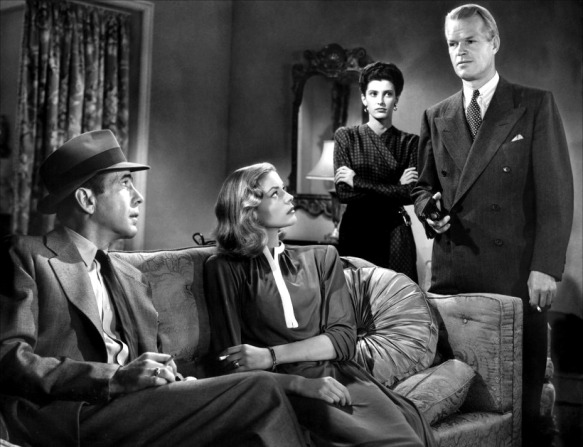 There are two versions of the Bogart production of The Big Sleep you can see. One is director Howard Hawks’s original cut. It was shown in 1945 to troops who were stationed in the South Pacific. As far as I know, it never saw a wide release until DVD. 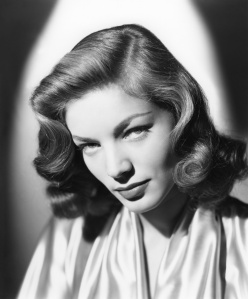 The differences between the 1945 version and the film later released in August 1946 mainly focus around Bacall. During the war, she had made her follow-up film, Confidential Agent (1945), to her immensely successful film debut (To Have and Have Not, a 1944 film that was her first appearance with Humphrey Bogart). I haven’t seen Confidential Agent, but critics at the time didn’t take to the film. Bacall’s agent naturally wanted to salvage his client’s career and told Warner Bros. that it would behoove them to add more scenes to the movie with Bacall and Bogart so their new moneymaker could keep doing just that. So in the spirit of To Have and Have Not Bogart and Bacall shared more screen time and Bacall’s role was elevated. Due to the reshoots, some actors were cut out of the film altogether and one actress (Martha Vickers, who played Bacall’s sister in the movie) had her role greatly diminished so she didn’t upstage Bacall. Other changes include slight alterations in plot points or making certain pieces of the story unclear where they had been spelled out before. (One classic example involves the death of a driver. In the original cut, the script writers said who was responsible for the chauffeur’s death. In the 1946 version and in the book itself, the culprit remains a mystery. Raymond Chandler even admitted that he didn’t know who did it. Apparently he forgot to explain it in the novel.)

Roger Ebert later said this of the two versions:

“Working from Chandler’s original words and adding spins of their own, the writers (William Faulkner, Jules Furthman and Leigh Brackett) wrote one of the most quotable of screenplays: it’s unusual to find yourself laughing in a movie not because something is funny but because it’s so wickedly clever. […] The new scenes [of the 1946 version] add a charge to the film that was missing in the 1945 version; this is a case where “studio interference” was exactly the right thing. The only reason to see the earlier version is to go behind the scenes, to learn how the tone and impact of a movie can be altered with just a few scenes.”

Because I had forgotten about the existence of the two cuts until I finished watching the film and due to the DVD copy I had being a little confusing about which side of the disc has which version, I accidentally watched the 1945 version first. Ooops. This wouldn’t have been so bad if I had planned to do this and had set aside the appropriate time to watch both versions. I didn’t. Therefore, the 1945 cut will be what I focus on today.

I have to agree with Ebert to a degree. Hawks’s original version does lack some needed oomph that the more famous version has in spades. What is nice, though, is seeing Marlowe at work. We are given a peak into his world and his process of investigating a crime. The movie has a grounded mundanity. There are areas of excitement, with shoot-outs and the like, but the sensationalism is kept to a minimum and we instead see what it might’ve been like for a private dick in the 1940s to investigate a blackmail scheme.

Bogie not playing to his usual type.

Bogart, as always, is a treat to watch. He has an irreverence that mixes with the witty script to create a lot of fun scenes. The standout moment for me is when Marlowe is investigating a bookstore and puts up the front of being an uptight man looking for a specific edition of the novel Ben-Hur. It’s out of Bogie’s normal comfort zone and is a refreshing change from his usual tough guy persona.

I liked that Marlowe is shown to be intelligent and, mostly, competent, as well. He may be a detective with the manners and, occasionally, tactics of a gangster, but while the character probably isn’t the best educated, you know he’s good at what he does. He isn’t the type of hero who falls into the solution by accident nor does he need clues spelled out for him. The scriptwriters take this idea to heart and never talk down to the audience. This can sometimes cause confusion when plot points aren’t adequately explained but with so many scripts nowadays that treat audiences like they’re drooling monkeys of dumb, it’s a breath of fresh air to see a film that expects the audience to keep up with a lot. 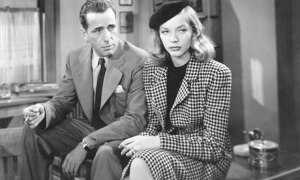 Bacall comes off as more antagonistic to Bogie throughout most of the 1945 cut. I can see why Warner Bros. added more scenes to spice up and improve the two’s onscreen relationship. When Marlowe says he is in love with Bacall’s character in the 1945 version, I was left saying, “Why?” He never seems to be given a reason to love this women. They don’t have a whole lot of chemistry and beats me what they have in common. I’m looking forward to catching the 1946 cut again so I can see whether or not this is improved by the added material.

The Big Sleep is a smart film noir that doesn’t need big car chases or tons of shootouts to hold the audience’s attention. The writers expect the story and characters to do that for them. Yes, it isn’t always clear what is going on, but I’d rather have a movie that I have to constantly think about than one that treats me like an idiot.

4 thoughts on “The Big Sleep”